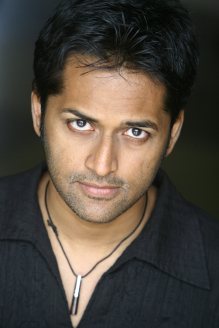 Roger voiced the role of Kaalinga in Punyakoti aka A Truthful Mother (Netflix), alongside Veteran Actress Revathy. It is the first Animated Sanskrit Feature Film and was successfully funded through WishBerry with Music by Maestro Illaiyaraja. His Lead Antagonist Role/Villain in Chambal, directed by 2 time National Award winning Director Jacob Verghese.

Roger’s Hindi-English-Spanish Feature Film Hola Venky!, garnered a cult fan base and had a fabulously successful 6-week Theatrical Run in the US and over a 100 Screenings in numerous cities in India, the US and Singapore.

Roger worked in HBO's The Leftovers opposite Carrie Coon (Gone Girl) and was seen as a Top of Show Guest Star on NCIS: Los Angeles opposite Chris O'Donnell and LLCoolJ. He was seen in Guest Starring roles on Weeds (SHOWTIME) opposite Kevin Nealon and the Lead Cast, and in Castle (ABC) opposite Stana Katic (James Bond: Quantum of Solace). He has worked opposite Betty White (7 time Emmy Winner, 4 time Golden Globe nominee) in The Bold and the Beautiful (CBS) and opposite Neil Patrick Harris in How I Met your Mother (CBS).

He was in Recurring roles on the new Nickelodeon show Victorious and The Young & the Restless (CBS). His Jerry Bruckheimer Pilot Miami Trauma (CBS) directed by Kenneth Fink (CSI) was picked up and aired as Miami Medical (CBS). His extensive Credits include House MD (FOX), Better off Ted (ABC), Outsourced (NBC), the Jay Leno Show (NBC), American Bodyshop (Comedy Central), iCarly (Nickelodeon), Mystery ER (Discovery) and he has worked on several Pilots with Emmy Winning Producers of Amazing Race and Comedy Central. Web Series Credits include Kevin Sullitt (with Phil LaMarr and Jordan Black) and Keeping up with the Guptas.

Roger played the Male Lead in the Blockbuster Film U-Turn (Netflix) that had its World Premiere at the New York Indian Film Festival and earned Roger BEST ACTOR Filmfare Award and South India Industry Movie Awards Nominations. His Film Humble Politician (Amazon Prime) was a Superhit as well. Roger's role in Humble Politician was both popularly and critically acclaimed. Roger has completed several Feature Film Lead Roles slated for release in 2019 and 2020, and is attached to several other Feature Film Projects. His Lead Antagonist Role in Chambal, directed by 2 time National Award winning Director Jacob Verghese received Critical and popular acclaim. Roger's Hindi-English-Spanish Feature Film Hola Venky!, garnered a cult fan base and had a fabulously successful 6-week Theatrical Run in the US and over a 100 Screenings in numerous cities in India, the US and Singapore.

Roger represented India as a Cultural Ambassador at Asian Trend in China where he was Nominated as Emerging Top Star of Asia. He has also served as an informal Cultural Ambassador to the Australian Film Delegation hosted by the Government of Karnataka and the Consul General of Australia.

The History of Hindu India a Documentary Series that Roger Narrated and Produced has had over 10 Million hits on YouTube and is being used in Schools in California, Singapore, Indonesia and Worldwide. Guru Chronicles an Audiobook that Roger narrated has been received internationally with great acclaim. Roger is an avid Holistic Health and Wellness Advocate through Organics, Yoga, and practices advanced Transcendental Meditation (TM) ordained as a TM Siddha, as taught by Maharshi Mahesh Yogi and advocated by David Lynch, Clint Eastwood, Jerry Seinfeld, Jim Carrey, Oprah Winfrey, Russell Brand and The Beatles.

Roger has been the face of several International and National Commercial Campaigns for McDonalds, Dell, HP Dreamworks, Microsoft, Blue Cross, DirecTV, Amway, Las Vegas, Cisco, Polycom, Comcast, Discovery Travel and Jack in the Box and was a face of the Microsoft Cloud Technology Campaign in India and is now an International Face of the SAP International Campaign. He is also a face of the new Dell International Campaign that he shot with Steven Spielberg's DP Janusz Kaminski. He has performed several Voices for Video Games like Uncharted: The Lost Legacy (Sony Nintendo), Age of Empires III (X Box) and the 24 Game (Pressman Toys).

He has performed for KSCO Radio in Santa Cruz, and Improv'ed all over Los Angeles with the group Consenting Adults. He won a title Mr.India California, was invited to fly to India where he was a Regional Finalist in the Bollywood Starsearch Grasim Mr.India. Roger has modeled for top International Designers including Reebok, Steve Madden, Paul Mitchell, Avirex, at San Francisco Fashion Week and for Bollywood Designers Satya Paul and Rohit Bal.

Roger received his Classical Acting Training from the reputed American Conservatory Theater (A.C.T), the American Film Institute (AFI) SAG Conservatory, The Groundlings, Footsbarn Theater Company (France), Upright Citizens Brigade (UCB), San Jose Repertory Theater and Ranga Shankara (India). In addition, he holds a BSME Mechanical Engineering Degree from BITS Pilani where he was Voted "Best Young Manager" by IIM Bangalore Alumni, and an MSME Masters in Mechanical Engineering Degree from the University of Maryland at College Park where he was part of the Student Union. Roger is an avid Aircraft Pilot and enjoys flying Single Engine aircraft, his favorite being the Cessna 172. He is also an avid Motorbiker and loves riding Suzuki GSX-R's, Royal Enfields and Harleys. Roger is trained as a Martial Artist in Tae Kwon Do and Muay Thai with Grand Master Ernie Reyes Sr. (of Red Sonja, Surf Ninjas fame).

Roger is an avid Philanthropst and donates his time and Celebrity to support, promote and host events for Children's and Education charities. Roger has been a TEDx Speaker, taught Master Classes at the prestigious NSD (National School of Drama) in India, Tent Cinema, Self-Development and Acting Workshops at Ravindra Kalakshetra, with Foreign Film Delegations at Dr.Nagathihalli Chandrashekar’s Tent Cinema Acting School and in Los Angeles and New York. Roger is the GoodWill Ambassador and was on the Advisory Board of Induz, a Children's Education Non-Profit/NGO, is the GoodWill Ambassador of SevaChild and was on the Advisory Board, an NGO/Non-Profit that provides Nutritional Supplements to underprivileged children in India, Brand Ambassador of LifeLine a rare Blood Group Donor Organization based in India. He has been an MC, Host and Celebrity Guest at a variety of mainstream, diaspora and cultural events in the US.

He is fluent in Hindi, Urdu, Tamil, Kannada and Sanskrit and does killer Middle Eastern, British and Indian accents. He is learning and getting comfortable with Telugu and Malayalam. Roger lives and works in Los Angeles and New York in the US, in Europe, and Bombay, Chennai and Bangalore in India.